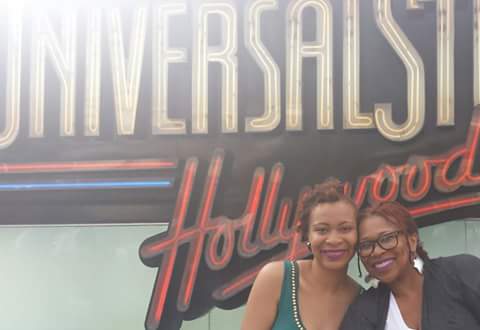 The time was upon us. We had three days to pitch our projects to 25 companies. When we touched down in Los Angeles, California we had a huge commute to get to our room.  The pitch festival location was in Universal City and we had made arrangements to stay in Long Beach. Every day of the pitch festival we had to take a bus, two trains and a trolley to and from the location. The commute and the heat were a bit much to deal with but we managed. We did a really lousy job during our first pitch. The individual we were pitching to couldn’t have looked less interested. I wanted to walk out so many times during our presentation. But I told myself, “No you paid to be here so you’d better see this through.” When we finished my mother and I went outside to regroup. I called my Uncle who is also a Pastor and has great experience with public speaking. I told him what had happened. After I spoke with him I decided that it would be best to put the index cards down and try to have more of a casual conversation with the person that I’m pitching to. My Uncle asked to speak with my mother so I gave her the phone. She started tearing up as she spoke with my Uncle. I motioned to her to find out what was wrong. With her eyes filled with tears she muttered “Uncle Grandpa died this morning,” I gasped. We shed our tears. Pitching after that couldn’t have been more difficult. Soon the commute, the heat, the pitching and the death in our family overwhelmed us.

“For where two or three come together in my name, there I am with them.”

We decided to step outside for a word of prayer. I immediately felt the presence of God. I knew He was there with us and somehow even with all that was going on around us, I knew that everything would be okay. He gave me a peace that surpassed my understanding. We pitched very well after that and with confidence we successfully made it through the 18th Hollywood Pitch Festival. Now it was time to travel back home. We had a connecting flight in Denver, Colorado. When we got on the plane there was an intoxicated gentleman sitting directly behind me. All throughout the flight he was pulling and kicking my seat. I told the flight attendant what was going on and asked if he could move my seat. But he said there weren’t anymore seats available. So I continued to put up with it. But then I started to smell cigarette smoke. Even though I smelled it I just couldn’t fathom that someone would be smoking on the plane, so I brushed it off. It wasn’t until my mother who was sitting across from me happened to turn around and saw the tip of the intoxicated passenger’s cigarette light up as he inhaled, that I received my confirmation. He was smoking on the plane! Onlookers frantically hit the call button for the flight attendant and several of them came trooping down the aisle to see what was wrong. All at once passengers started yelling out “He’s smoking on the plane! He has a cigarette!” Thankfully the flight attendant confiscated the cigarette and the lighter. We made it back to New York safe and sound. As for the intoxicated smoker, he ended up going to jail.